Instigated by the COVID -19 pandemic, SANDY was created during George Keaton’s time isolated at home. This past year was spent creating and imagining the world of SANDY, while Keaton and his family craved escaping reality and dreamed of faraway places. When scheduling SANDY, the exhibition was set to open the gallery’s 2021 season in January. Keaton, admittedly an unhurried painter, asked to have a few more weeks to complete the collection, so together the decision was made to push the exhibition to February 2021. This serendipitous re-scheduling allowed SANDY to run congruently with Black History Month. Since 1976, the United States has celebrated African American history in the month of February. Keaton prefers to be recognized by his art vs. race, but when asked what it means to him to have a solo exhibition during Black History Month, Keaton expressed “This is a very special opportunity. MLK, Malcom X, Harriet Tubman, all the people we recognize for fighting for our rights. They fought for my ideas and dreams to be lived. I am appreciative to the people who have paved the road, of which I do not take lightly. It is my hope to make them proud.”

Throughout Keaton’s painting career, the subjects of his paintings have featured animals of all kinds. Whether that be mammal or amphibian his fascination with the creatures of this earth is inspiring. After FLUX, Keaton’s solo exhibition in 2016 (each painting was a skull of a different animal), Keaton’s inspiration turned back to living animals. While working on a few commissions, SANDY started to appear in his mind’s eye. Before Keaton knew it Sandy, the camel, came to life in the bedtime stories told to his son. When asked to tell Sandy’s story, Keaton began, “Sandy the camel lived in the desert, but dreamed of exploring the world. Each night he dreamed of being transported to another place. He soon found that his favorite place was the rainforest. There, he met friends of all kinds and realized that he was one of many types of creatures on planet Earth. Soon, he found what it was like to confront danger and after meeting and facing his fears he goes back/wakes up in his little piece of the desert. He reflects on his journeys and is in awe of his travels and can only wait until the next night to further explore the planet he had come to love and cherish.” Keaton then stated, “Of course, Sandy is a metaphor for escapism. COVID-19 has impacted most individuals; one of the main impacts has been travel restrictions.” As Sandy’s adventures came to life in the bedtime stories told, Keaton started to find Sandy in the painting he was currently creating. From there, O.B., Fancy, Bam and his other friends came to life. Keaton relies on his imagination to take him further than his feet can. However, he always has Michael Jackson’s infamous quote, “I will always regret the limitations of my imagination” in the back of his brain and hopes that he and his family will be able to travel and expose themselves to new adventures very soon.

George Keaton, a Chicago suburb native, is a self-taught painter. At the age of four, his father pulled out a nickel and showed him the magic of creating his first drawing. First, tracing the edge to make wheels, then connecting the circles with two lines to create Keaton’s now signature, a car. This simple drawing was the first creative spark. Not one year later, Keaton found that if he mixed his father’s white shoe polish with the black, he made grey. These simple acts inspired him to become the painter he is today. Keaton’s early adult life was spent traveling while working as a model. During his time in New York City and Atlanta, Keaton kept his sketch book on him, but expressed, “I never thought I could pursue painting as a career.” While visiting museums and galleries Keaton began to notice that the artwork he was appreciating was made by living artists.

After moving back to Chicago, Keaton’s first introduction to painting was on the streets. “Back in the day” as Keaton refers to it, he dabbled in creating on the streets with fellow painters. Though his practice didn’t remain there he has brought that energy into the studio and continues to paint with the same techniques he learned during that time. Drips, splatters, gestures, scrapes and the happy accidents that come along with painting spontaneously have continued to inspire Keaton and remain part of his painting practice.

The foundations of Keaton’s practice are color and shape. Shape, first being inspired from the wheels of his first drawing and color coming from his amateur mixing of his father’s shoe polish. Keaton’s color palette continuously evolving, has left viewers wondering where his inspiration comes from. When asked to embellish, Keaton stated, “Daily, our planet provides the most vivid colors. No matter where I have been in my life, the sunset has always inspired me.” Keaton established early on his diverse and rich color palette. In an attempt to mimic our planet’s natural beauties, Keaton sought to use every color available to him. While creating SANDY, Keaton saw the value in breaking down his color choices and challenged himself to be skillful with one main color and other related tones. While discussing the psychology behind color, Keaton acknowledged that socially, humans associate certain colors with different aspects of the soul. Keaton expressed, “I want the viewer to feel the soul of the painting through my color choices.” Being a self-taught painter, Keaton has related his painting practice to a puzzle. Each painting is a piece of a puzzle that he is gladly taking his time to finish.

SANDY, starting as a bedtime story was born in Keaton’s studio and now takes its first breath on the gallery walls. Creating eight paintings in a year was challenging, but ultimately, it is Keaton’s hope that people enjoy escaping into Sandy’s world and that they are open to seeing a different approach to his well-recognized style. Keaton acknowledged, “Like Sandy, we all want an escape. I hope the viewer finds a little piece of solace and can escape, even if it just for a moment, into the world of SANDY.” 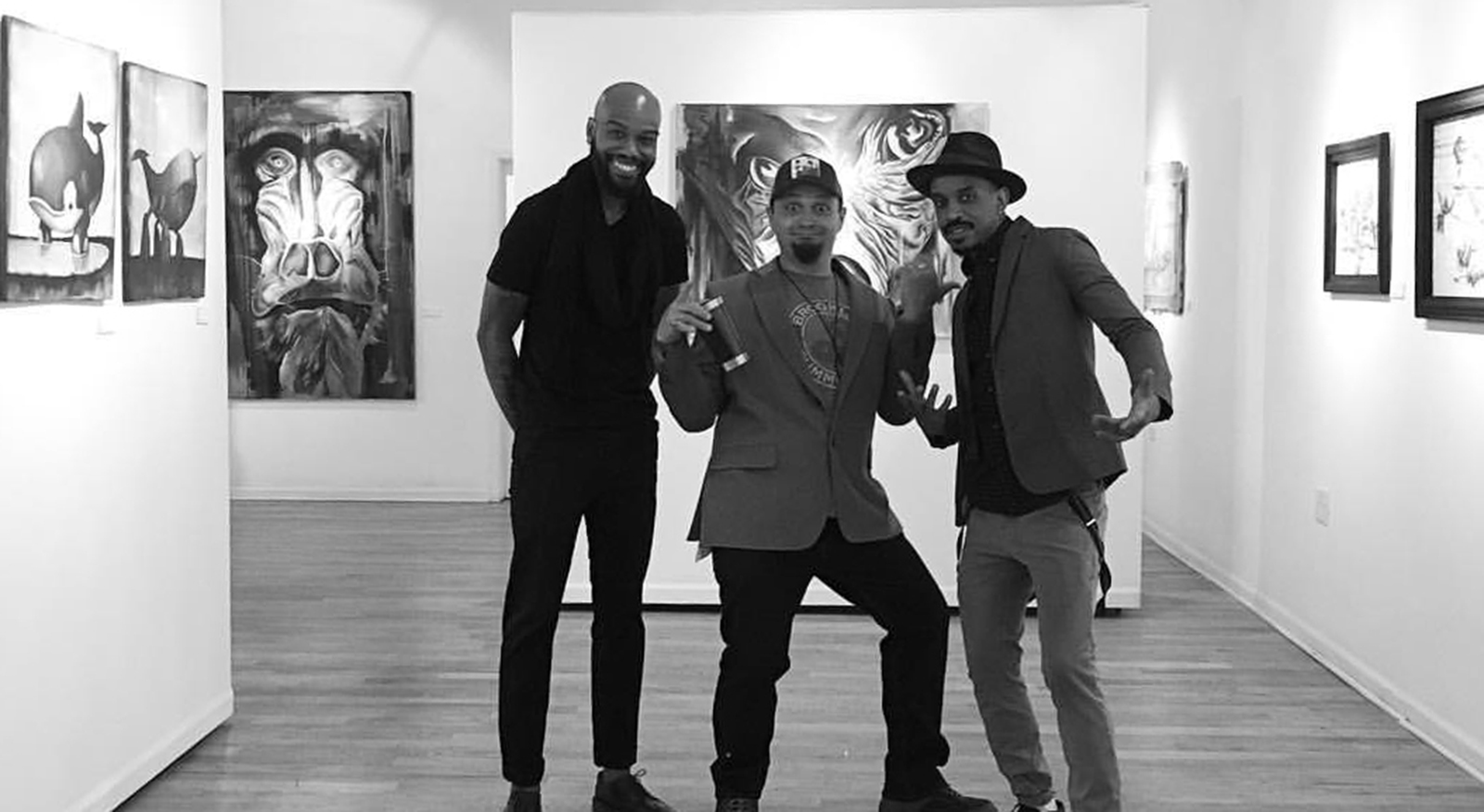 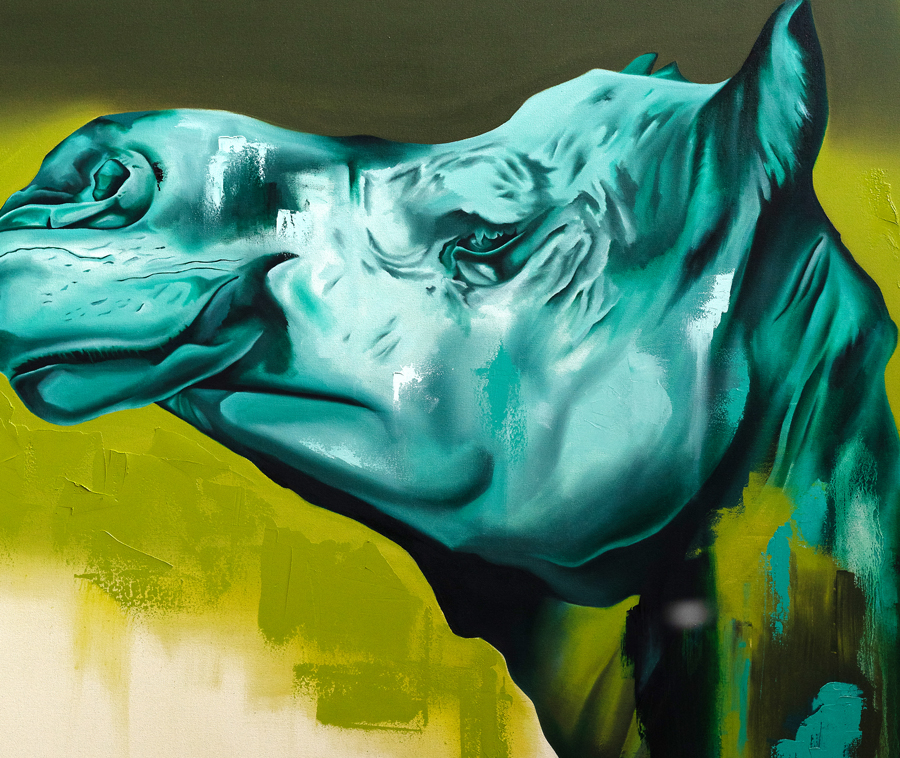